Victor Comras and the Flawed Diplomacy 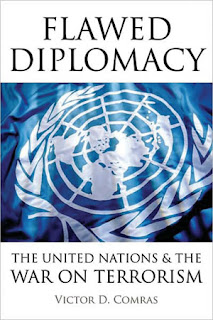 Victor Comras, former US diplomat, has published a new book: "Flawed Diplomacy: The United Nations and the War on Terrorism" (Potomac Books, November 2010). It provides an insider's look at, and tells the story of the United Nation's efforts to respond to terrorism as a threat to international peace and Security and how these efforts were shaped and sometimes sabotaged by conflicting forces and interest groups inside and outside the United Nations. It also provides some key recommendations for strengthening this international effort.

The book stems, in part, from his own experiences as one of the original five International Monitors charged by the Security Council with reporting on the actions taken by countries to respond to terrorism. It also delves into the history of the UN response to terrorism and provides extensive discussion of the roles played by the Security Council and General Assembly as well as the 1267, 1373 Counter Terrorism Committee, and the 1540 Committees.

The book has particular relevancy as we consider, ten years after 9/11, the progress made, and steps that still need to be taken to deal with the threat of international terrorism.
.
It is possible to review the Table of Contents and read the introductory chapter of the book on line at http://www.potomacbooksinc.com/Books/BookDetail.aspx?productID=209192

The Washington Institute held a special event to launch the book. They have posted a report of that event (and the audio) at http://www.washingtoninstitute.org/templateC05.php?CID=3271

It is now also available on Kindle at http://www.amazon.com/Flawed-Diplomacy-Nations-Terrorism-ebook/dp/B0050SNSLK/ref=tmm_kin_title_0?ie=UTF8&m=AG56TWVU5XWC2
----------------
Victor D. Comras led the State Department's foreign policy trade control and sanctions programs for nearly a decade. He retired from the State Department in 2001 with the permanent rank of Minister Counselor. In May 2002 he was appointed by the UN Secretary General to serve as one of five international monitors charged with overseeing the implementation of Security Council measures against al Qaeda and the Taliban. And, in 2009 he was selected to serve as a member of the UN Panel of Experts on North Korea sanctions. Mr. Comras is a leading expert, author and lecturer on international trade regulation, sanctions, export controls and the global effort to combat terrorism and terrorism financing.
Posted by Laughing Diplomat at 5:32 PM