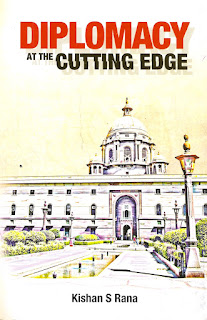 Indian Ambassador Kishan Rana has published a new book titled "Diplomacy at the cutting edge" (Manas Publications, 2016) with a complete personal narrative of his 35 years of Indian Foreign service. But the book goes beyond diplomatic memoirs: it also gives an original insight on the practice of diplomacy.

As Prof. Geoffrey Berridge writes in his presentation: "Kishan Rana is not only a prominent scholar-diplomat but also a dedicated and successful teacher of diplomatic practice, this memoir .... uses the different stages of a long and varied career chiefly to ponder at length and then draw lessons form them. It is written in his usual crisp and fluent style and I recommend it most warmly".

Many of Kishan Rana’s books, such as Diplomacy of the 21st Century (2011) and The Contemporary Embassy (2013), are already used as textbooks at several universities. “Diplomacy at the cutting edge” will probably be another one of them.

Kishan S. Rana graduated in Economics (BA Hons and MA) from St. Stephen’s College, Delhi and served in the Indian Foreign Service from 1965 to 1995. He was India's Ambassador/High Commissioner to Algeria, Czechoslovakia, Kenya, Mauritius, and Germany, and was on staff of Prime Minister Indira Gandhi in 1981-82. He currently holds positions as Professor Emeritus of DiploFoundation, Malta and Geneva and is an Honorary Fellow at the Institute of Chinese Studies, Delhi. He is also an archives by-fellow at Churchill College, Cambridge, and Public Policy Scholar at Woodrow Wilson Centre, Washington DC. He serves currently as guest faculty at the Diplomatic Academy, Vienna, and was a Commonwealth Adviser to the Namibia Foreign Ministry in 2000-01.
Posted by Laughing Diplomat at 9:03 PM No comments:

An Ambassador seen by W. Goethe


In his famous book "The Sorrows of Young Werther"  Johann Wolfgang von Goethe writes an interesting description of an old Ambassador seen by his Secretary Werther:


DECEMBER 24.
As I anticipated, the ambassador occasions me infinite annoyance. He is the most punctilious blockhead under heaven. He does everything step by step, with the trifling minuteness of an old woman; and he is a man whom it is impossible to please, because he is never pleased with himself. I like to do business regularly and cheerfully, and, when it is finished, to leave it.
But he constantly returns my papers to me, saying, "They will do," but recommending me to look over them again, as "one may always improve by using a better word or a more appropriate particle." I then lose all patience, and wish myself at the devil's. Not a conjunction, not an adverb, must be omitted: he has a deadly antipathy to all those transpositions of which I am so fond; and, if the music of our periods is not tuned to the established, official key, he cannot comprehend our meaning. It is deplorable to be connected with such a fellow. 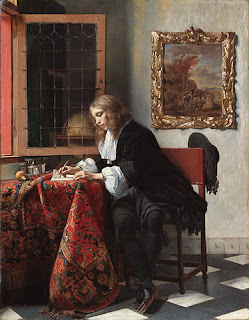 Posted by Laughing Diplomat at 6:18 PM No comments: