"Between terrorism and global governance" by Roberto Toscano 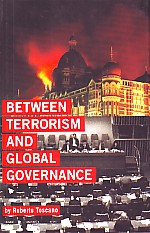 Here is a short excerpt from the preface of the book:

"The first chapters of this book revisit, through essays devoted to thinkers in the field of poolitical philosophy (from Machiavelli to Huntington), the tension between ethics and politics, trying to suggest that ethics is intrinsically tied to politics, and that moral awareness and realism are not in contradiction insofar as we move beyond individual ethics and address the issue of responsibility toward society and especially the rights and interests of others.
The second main focus of this book is terrorism, the vile and despicable form of conflict that targets innocent civilians.Both for terrorism and for other transnational threats and crises, from the present downturn to global warming, the nation-state, though still primarily responsible, cannot conceivably be adequate to the task.
This is why ethics and realist politics point in the same
direction: that of the need to recognize duties toward those who are not our fellow citiziens as well as limitation to a sovereignty that, while legitimate, cannot be used against both legal and moral norms."

The book is available at the online bookstore http://www.dkagencies.com/

-------------------
Roberto Toscano is the Italian Ambassador in New Delhi and previously was Ambassador in Teheran. In the diplomatic carreer since 1969, he directed for several years the activities of the Policy Planning unit of the Italian Ministry of Foreign Affairs. He published several essays on the topics of human rights and of the ethics of international relationships. He taught International Relationships at LUISS University in Rome.
A complete list of his publications is available at http://www.robertotoscano.org