In 2002 The Ministry of Foreign Affairs of Greece has published a book (available only in Greek language) entitled: “Diplomacy and Authorship”.

For the first time the Ministry has put together a comprehensive catalogue of the books written by Greek diplomats, including those volumes that do not deal with diplomatic affairs.

The initiative came from Ambassador Adamantios Vasilakis when he was Head of the Centre for Analysis and Planning of the Ministry. Vasilakis not only took the initiative but also actively participated in the whole layout of the book.

In the book, diplomats are listed in alphabetical order; for each of them some basic biographical information and a photo are provided. This description is followed by a list of their writings classified by subject (International Relations, Law, Literature, History etc.).

Moreover, the comprehensive and well illustrated publication contains further useful data concerning Greek diplomats’ writings such as a list of the reprints, a list of awarded books and a useful list of abbreviations and acronyms.

Among famous Greek diplomat-writers included, one can find George Seferis (alias Georgios Seferiadis), who won the Nobel Prize in literature in 1963 for his lyric poetry.

The idea behind this book is similar to the one used in a recently published research (available in English language) by Diplofoundation and the Italian Ministry of Foreign Affairs concerning books written by Italian diplomats (Through the Diplomatic Looking Glass -
http://baldi.diplomacy.edu/italy/diplomaticglass.htm).

A Catalogue of books written by Swiss diplomats is currently being compiled by Amb. Jacques Rial. The draft of this work is available at the webpage:
http://www.diplomacy.edu/Publications/display.asp?Topic=Writers-Swiss
Posted by Laughing Diplomat at 11:10 PM No comments:

Amedeo Guillet and his Private War 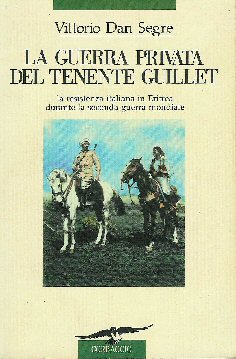 The book by Vittorio Dan Segre entitled “La guerra privata del tenente Guillet. La resistenza italiana in Eritrea durante la seconda guerra mondiale” [The Private War of Tenent Guillet] (Tea, Milano, 1997) is an interesting biography of an Italian legend, military officer and diplomat, written by another eclectic figure, who parted his life between the Israeli diplomatic and intelligence services and the academic career.

The book (in Italian) is about the exceptional life of Amedeo Guillet, a former officer of the Italian Army. Descendant from a noble family from Piedmont, born in Piacenza in 1909, he graduated from the Academy of Infantry and Cavalry of Modena in 1930. An excellent horseman, Guillet was selected for the Italian Olympic equestrian team and was due to compete in the Berlin 1936 Olympics. Instead, he participated to the Italian conquest of Ethiopia in 1935 and volunteered during the Spanish Civil War, returning to East Africa in the aftermath if World War II.

During the war, Viceroy Amedeo, Duke of Aosta, gave Tenant Guillet command of the 2,500 strong Gruppo Bande Amhara, made up of recruits from throughout Italian East Africa. Guillet’s most important battle happened towards the end of January 1941 at Cherù when he decided to attack enemy armored units. At dawn he charged a column of tanks armed only with swords, guns and hand grenades. This was the last cavalry charge the British faced and one of the last in the history of cavalry.

After the Italian surrender in East Africa in 1941, Guillet began a private war against the British, faithful until death to the oath to the House of Savoy, with the nickname of “Devil Commander”. He was famous during the Italian guerrilla war in Ethiopia in 1942 because of his courage and ability to obtain the support of the local population - thanks to his knowledge of Arabic and Islamic civilization - in order to avoid being captured by the British Intelligence. Guillet was finally able to reach neutral Northern Yemen, where he trained soldiers and cavalrymen for the Imam’s army. He finally returned to Italy a few days before the armistice, embarking incognito on a Red Cross ship.

After Italy’s surrender, Guillet was promoted to Major for his war accomplishments and was assigned to the Military Intelligence. In this role, he worked closely with an official of the British services, Vittorio Dan Segre, who later became his close friend and biographer.

Following the war Guillet entered the Italian diplomatic service where he represented Italy in Egypt, Yemen, Jordan, Morocco, and finally as ambassador to India until 1975. In 1971, he was in Morocco during an assassination attempt on the King.

On 4 November 2000, the Italian Armed Forces Day, Guillet was presented with the Knight Grand Cross of the Military Order of Italy (the highest military decoration in Italy) by President Carlo Azeglio Ciampi.

Vittorio Dan Segre, born in Italy in 1922, emigrated to Palestine in 1938. He worked for the British Intelligence during WWII. He met Amedeo Guillet in Naples in 1944, after having read the intelligence files about the “Devil Commander” and the Italian guerrilla in Abyssinia. After a brief period in the diplomatic service of Israel, he pursued the academic career, teaching at the University of Haifa and then at Oxford University, MIT, and Stanford University.

Posted by Laughing Diplomat at 9:50 PM No comments: