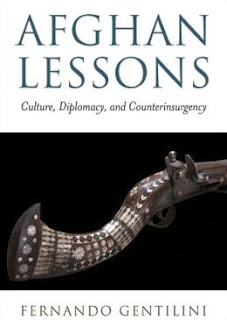 Fernando Gentilini, an Italian diplomat who is currently director for Western Europe, Western Balkans, and Turkey for the European External Action Service, has just published a new book titled  “Afghan Lessons: Culture, Diplomacy, and Counterinsurgency” (Brookings, 2013)
The book was originally published in Italian ("Libero a Kabul", Editori Internazionali Riuniti, 2011) and has been translated by Angela Arnone.

Here is a short description by the publisher:
“For nearly two years, Fernando Gentilini lived in war-torn Afghanistan as a civilian envoy. From July 2008 to February 2010, Gentilini, a diplomat with twenty years of experience in crisis management and multilateral and European affairs, was the civilian representative of NATO, running a counterinsurgency campaign in the troubled nation. Afghan Lessons presents the fascinating story of Gentilini’s mission, taking readers on an eye-opening journey of Afghanistan: its people, its society, and its politics. Gentilini’s firsthand account looks at the nation through a kaleidoscope. He explores Afghan history, literature, and tradition, while also reflecting on the international mission in Afghanistan from both a diplomatic and military standpoint. In Afghan Lessons, Gentilini examines Afghan culture in an effort to understand some of the most basic questions of Western involvement: Why are we there? What does an international presence mean, and how can it help?.”

For more information on the book and for the table of contents: http://www.brookings.edu/research/books/2013/afghan-lessons

Fernando Gentilini was born in Subiaco (Rome) on 2nd March 1962 and he joined the Italian Diplomatic Service in 1990. He has served in the Italian Embassy in Addis Ababa and in the Italian Permanent Representation to the E.U. in Brussels. In 1999 he was seconded to the Policy Unity of the Secretary General/High Representative for the CFSP in Brussels and after that he has been deployed in several Balkan hot spots. In 2006 he was appointed Deputy Diplomatic Advisor to the Italian Prime Minister. In 2008 he was nominated NATO Senior Civilian Representative in Afghanistan. He is currently director for Western Europe, Western Balkans, and Turkey for the European External Action Service.

--------------
For additional information on books published by Italian Diplomats consult: http://baldi.diplomacy.edu/diplo
Posted by Laughing Diplomat at 1:44 PM No comments:

Stefano Baldi talks about innovation in diplomacy at a TEDx event in Trento (Italy).  He develops a few ideas on how tradition and innovation are a winning mix for a contemporary diplomat.

Here is the description of the video and the event:

Stefano Baldi is an Italian diplomat with a lifelong commitment to innovation and creativity applied to diplomatic activities. Now that he is the head of the Training structure of the Italian Ministry of Foreign Affairs, he is particularly engaged in emphasizing and experimenting with shaping the role of the XXI century diplomat. He will explain how being a diplomat today is a mix of tradition and innovation. In the era of web 2.0, currently characterized by Social Media, diplomats are challenged by constantly evolving ways of communication. Stefano will argue why an adequate and continuous training will empower the diplomat of the XXI century, the Diplomat 2.0, to be still an essential and irreplaceable resource for the country he/she represents. He regularly blogs on http://istitutodiplomatico.wordpress.com.

In the spirit of ideas worth spreading, TEDx is a program of local, self-organized events that bring people together to share a TED-like experience. At a TEDx event, TEDTalks video and live speakers combine to spark deep discussion and connection in a small group. These local, self-organized events are branded TEDx, where x = independently organized TED event. The TED Conference provides general guidance for the TEDx program, but individual TEDx events are self-organized.* (*Subject to certain rules and regulations)

Posted by Laughing Diplomat at 11:33 AM 3 comments: