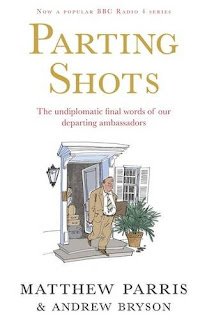 Matthew Parris (and Andrew Bryson) is the author of an interesting and original book titled "Parting shots. The undiplomatic final words of our departing ambassadors" (Penguin, 2010).
The book is a based on a BBC 4 radio series (broadcasted in 2006)  concerning final telegrams UK Diplomats wrote when leaving their country of assignment. They could say whatever they wished in their final telegram home, and they could be very frank about the cultures and countries in which they served. Some of these files were released to the BBC by the Foreign Office under the Freedom of Information Act. The older despatches - those written more than thirty years ago - are from the National Archives in Kew. Some of the text of the dispatches are available online (http://www.bbc.co.uk/programmes/b00n85t5)

Here is a short description of the book provided by the publisher:
"When leaving a foreign posting, Britain's ambassadors were encouraged to write a valedictory despatch until the practice was abolished in 2006. Unlike the usual style of the diplomatic bag, these last reports from foreign posts were unbuttoned, indiscreet and often very funny. There was much settling of scores, some poking fun of foreigners, a degree of moaning about the privations of Embassy life - and sometimes a bit of serious analysis too. Based on a very successful BBC radio series, Matthew Parris, who once worked for the Foreign Office and had the task of distributing the despatches, and Andrew Bryson have compiled an always entertaining and frequently hilarious volume of the best of them."