Ebook by Alessandro Minuto Rizzo titled “The Road to Kabul” 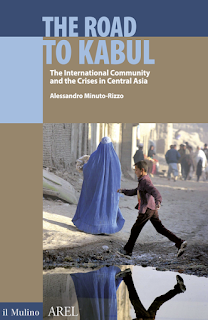 Alessandro Minuto Rizzo, a former Italian diplomat, has just published a new ebook titled  “The Road to Kabul. The International Community and the Crises in Central Asia” (Il Mulino, 2015)

The book was originally published in Italian in 2009 ("La strada per Kabul. La comunità internazionale e le crisi in Asia Centrale, Il Mulino). The new English version has been updated with the last political development.
Here is a brief description by the publisher:
“At the same time in a geo-political critical area, surrounded by problematic countries of different colors. On the one side Pakistan with the atomic bomb and a porous border. On the other Iran.
The United Nations Security Council authorized an international military intervention and in 2003 the Atlantic Alliance took the unprecedented step to change its own history and to accept the challenge of an operation 6000 km away. History will judge if it was a wise decision. The operation, however, came to a close at the end of 2014 in an orderly way. The country is still assisted today but in a lighter manner.  The author was the Deputy Secretary General of NATO and a witness of all those events since the beginning, as he was in Kabul on the first day of the operation, in August 2003. He has seen its start, the complicated decision making on the strategy, its up and downs, the difficult relationship with Pakistan. At the beginning nobody had really an idea about the country and different judgments can be given about the wisdom of the various steps that were taken. One thing is certain, that the task was the most difficult that one could imagine. An unprecedented effort of the international community to reconstruct a failed country of this size. He is therefore a privileged observer at the unfolding of the events and he can give us an overall scenario of the crisis, which is uncommon. Trying to put together the pieces of the puzzle. Knowing well the main actors and the personalities involved. The author takes us on a long journey to the Hindu-Kush, Islamabad, New Delhi, Central Asia. He wants to give us a picture that is not only political and military with the description of people, flowers and the long horizons of the Bamyan valley.”
Alessandro Minuto Rizzo, The Road to Kabul. The International Community and the Crises in Central Asia,  Il Mulino, 2015, pp.192, € 10,99
For more information on the book and for the table of contents click here

Alessandro Minuto-Rizzo – a distinguished ambassador and Italian diplomat - has much experience in a number of areas, not just international relations. In particular, he has held terms of office in Washington, Prague, Paris, and Brussels, and has experience in European structural funds, European policies, the European Space Agency. He has travelled extensively in Asia and has visited Afghanistan and Pakistan on a number of occasions, chairing the Atlantic Council on several official missions. He has published a number of articles and essays in specialist journals on Europe, the Atlantic Alliance, Foreign and Defence Policy. Alessandro Minuto-Rizzo is a teacher of European Security and Defence Policy at LUISS University in Rome.
--------------

Posted by Laughing Diplomat at 12:17 PM